The Geelong Ladies Hockey Club was formed in September 1912 by a group of ladies including the famous Rice sisters from Marshalltown.

The members of the Geelong Ladies proudly wore their uniforms, consisting of a green blouse, fawn woollen tunic, green girdle (or sash), green ribbed stockings and a very few fortunate rich members could afford the luxury of sandshoes. Hockey sticks were made of hickory, and in those days, no part of the stick could be raised above the shoulder, front or back, when attempting to play the ball. Hockey grounds were marked out with sawdust scavenged from local timber mills and carried by bicycle to the ground.

Travel was a problem as away games were played in Melbourne. A local bus company “Hargreaves” was used for transport to Melbourne and the ladies frequently combined their hockey trips with shopping in Melbourne prior to playing the game

The Geelong ladies were very much ladies in those days and were well regarded in Melbourne not only for their prowess at hockey but also for their dexterity in producing hearty afternoon teas at all home games.

In 1926 the club entered a team in the V.W.H.A competition, playing in Geelong and Melbourne. The home ground was played in an area presently known as the Belmont Common and later was changed to Eastern Park. The annual Geelong Interhouse sports were a part of Geelong’s success story with its team winning the competition from 1928 to 1930. Cora Haywood, an original member from 1912 to 1948, and president for many years, provided financial assistance for travelling players as well as equipment. Kate Harris and Mary Cocum were instrumental in the running of the club for over ten years.

In 1956 the Geelong Ladies Club discontinued travelling to Melbourne for matches and entered a team named “Pivot” in the newly formed G.W.H.A.  A changing shed, financed by the Geelong Ladies Club members was built on Corio Oval and used by the club whilst affiliated with the V.W.H.A. until 1956. The shed was then used by more than 200 girls in the G.W.H.A. competition until 1966 when the association moved games to Stead Park.

In 1965, club member Margaret Murray was awarded a coveted and internationally recognised Umpires Badge by the All Australian W.H.A., the first non-metropolitan umpire to achieve this honour. In 1966 she was appointed manager/coach of the Victorian Country team to play Japan. A total of seven teams were entered into the G.W.H.A. and fees in 1966 were $4. Lighting strikes were added on  the lengths of the tunics, and girls were made to leave the field if their uniforms were too short. A raffle raised $13.50, with the lucky winner taking home a new hockey stick.

In 1967, Cheryl Moore of the Geelong Ladies Hockey Club was declared Miss Geelong for Victorian Hockey, in a contest to raise finance for the International Hockey Tournament Fund. In 1968, the club entered Herne Hill primary school in the U14 competition, which meant that Bell Park Secondary School benefitted from the time put in by the Geelong Ladies Hockey Club members. In 1974, women’s fees were $6.25.

The Geelong Ladies Club was strong enough to survive two World Wars and the 1930’s Depression. The Geelong Ladies Hockey Club produced a certain degree of magnanimity in Geelong hockey circles by producing many players who represented Victoria.

The Geelong Men’s Hockey Club was formed in 1954 by Jim Urqhuart and Roland Oliveiro. Jim came to Geelong from Wales and used to travel to Melbourne to play for Brunswick in the Victorian Men’s Hockey Association. Brunswick suggested he form a club in Geelong and the Brunswick club donated 18 hockey sticks and 2 goals.

A notice placed at the Gordon Institute of Technology in 1954 saw nine Pakistani Colombo students join Jim and Roland at the club. They played their first season in “C” grade in the Melbourne competition and by 1963 had been promoted to “A” reserve. In 1960, three teams were entered into divisions of the V.A.H.A.

In 1966, nine of the Geelong Men’s Hockey Club members left to form the Geelong & District Men’s Hockey Association, further helping to develop the sport in the region. This weakened the club but meant local hockey would flourish, and that local competition was available for a large number of junior players moving into senior ranks. Men’s fees in 1966 were $8 plus $0.20 insurance.

In 1978 a merger was proposed between the Geelong Ladies Hockey Club and Geelong Mens Hockey Club. On March 17, a new constitution and by-laws were drafted. In 1979 a trial period was implemented and at the close of the season the members of both clubs formally ratified the constitution of the new club.

In 1980 the club played its first year as the Geelong Hockey Club. The merger gave the club many benefits including greater depth, a sounder financial base, greater ability to recruit, coaching advantages and better social functions. On 5 October 1983, the Geelong Hockey Club became incorporated and was the largest club in Geelong with 4 senior mens teams, 5 senior ladies teams and 6 junior sides, a total of 132 (+2 social) members. Uniforms were changed to signify the merger and remain today.

Early 1983 saw a season hampended by drought and matches were played both midweek and Saturdays on gravel pitches. In July 1984, the club paid $15,000 towards lights for the gravel surface used by the association. These fields were named after one of the Geelong Hockey Club’s own members, the late Keith Murray.

The Geelong Hockey Club borrowed $10,000 in 1984 for the purchase and movement of its clubrooms from the Australian Portland Cement Site to Stead Park. This loan was paid out in 1993 through a large number of fundraising efforts and much hard work particularly by committee members. Such a facility was enjoyed by not only club members, but also by players during the “All Blacks” trips, a reciprocal competition between Geelong and Tasmania and also by various groups during the Victorian Women’s Country Championships over any years.

In 1984, our club member and All Australian umpire, Jan Adams, umpired at the Olympic Games in Los Angeles.

Fundraising efforts have seen the club participate in the October fest celebrations at the Dandenong Showgrounds between 1981 and 1992, and in 1983/4 the club had its own calendar. 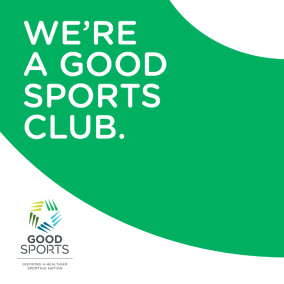